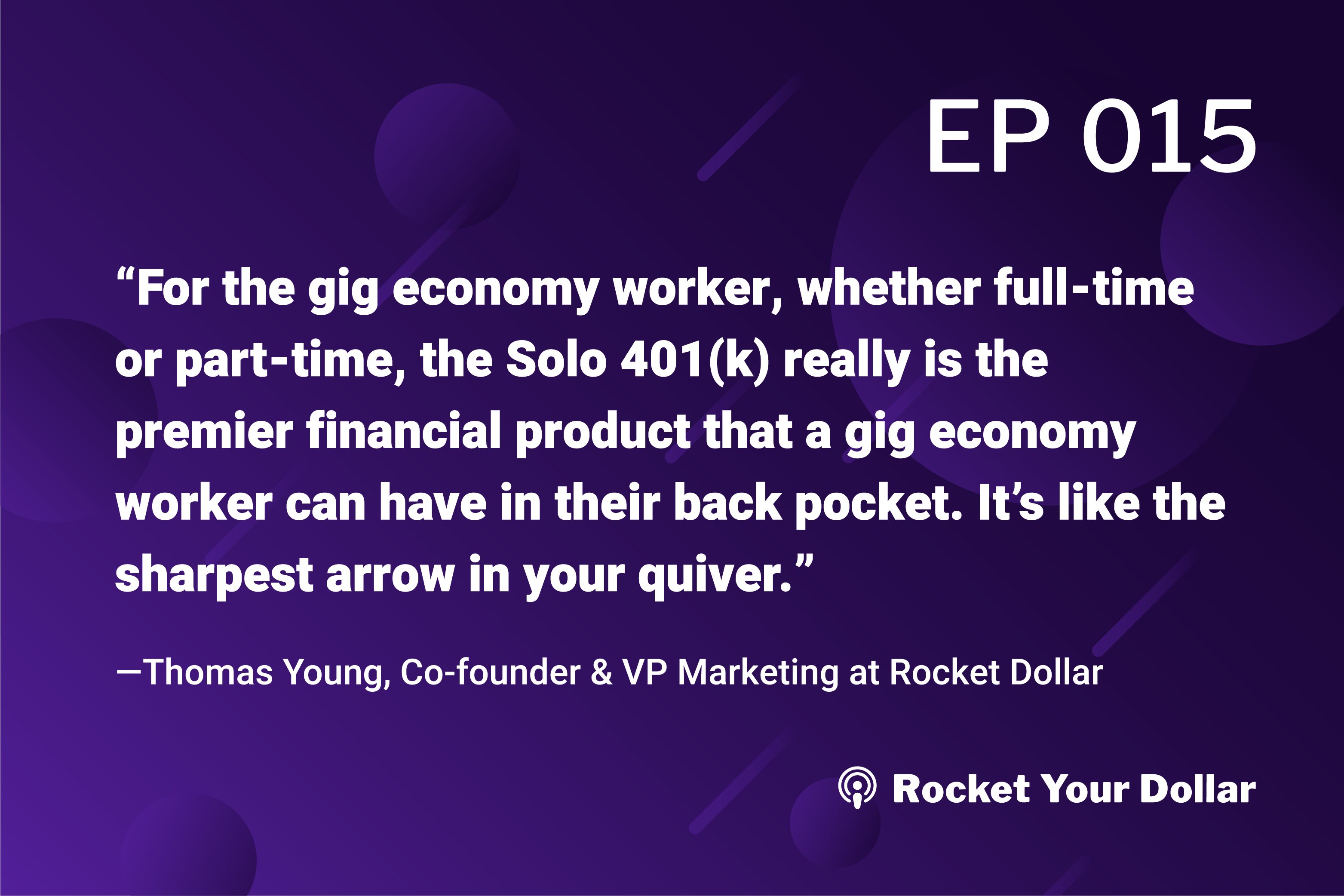 Before Rocket Dollar, Thomas Young the host of Rocket Your Dollar and VP of Marketing at Rocket Dollar, was an avid freelancer. He shares his self-employed experience and explains why the Self-Directed Solo 401(k) is a product made for the freelancer that wants unlimited investment flexibility and a nest egg to retire with.

Thomas Young: Today we're going to talk about a topic that I personally really like to share with people, and that is people that participate in the gig economy. So anybody that makes any sort of side income past their main job. And as you may or may not know, the tax implications of side income are even worse than your regular nine to five. And that's really where the solo 401(k) shines, is allowing people to participate in the gig economy and then really fuel up their solo 401(k) or 401(k) contributions. And the income that qualifies for a solo 401(k) has to be "self-employed" income. And that's anything from driving Uber, to doing part-time consulting work.

In my case, I've been making 1099 income ever since college, first starting as a TaskRabbit. And if you're not familiar with TaskRabbit, it's Uber for odd jobs. So anything from assembling Ikea furniture, to bartending, to being a cater waiter at parties. And that was kind of my first self-employed income, if you will, where I made 1099 money. And I thought it was great and I spent it all. But then tax time came, and that's really where I started learning that self-employed income isn't treated the same way. I didn't know when I was in college that they didn't take any money out and that you had to save for paying your tax bill, and all these different things that are taken care of for you when you work at a company full-time, or you're a W2 employee.

When I started learning about the solo 401(k) when I was in the early stages of my career, working for another company that offered this product, I started realizing how powerful the contributions to a solo 401(k) were. And like a good, typical millennial, I always had side income. I would consult for other small companies. I ran a small social media marketing agency before starting Rocket Dollar, and that was all through a single-member LLC. And it was all self-employed income, in addition to my main job, which is what I lived off. So I really firsthand experienced the power of the solo 401(k) when I could make 12, 13, 14, $15,000 extra a year apart from my main job, and just stick that in a solo 401(k) and not have to worry about my tax bill because it was a contribution. Because I always worked at small companies, they didn't offer a 401(k). So the only way that I could participate in a retirement account in any sort of meaningful way past the, at that point, $5,500 that you could contribute to an IRA, was through a solo 401(k).

And it was great to be able to just go do this, throw it in there, and then use that money to invest. And because I wasn't, obviously not, an accredited investor or a very sophisticated investor, I could just open a brokerage account and invest passively in funds, which now I kind of preach the opposite, now that we're talking about it, in alternatives and checkbook control in Rocket Dollar. But at that point, it was great for me, because it lowered my tax bill. It let me feel like I was saving, and I was saving quite a bit. But it also let me take all the money that I was making at my main job and spend it and have fun, and kind of have a lifestyle that I liked. So it made that extra work worth it. And I wasn't knocking 30% off the top of it that I had to pay in taxes.

And now, because I did that at a young age, that money's working. And hopefully, when I'm 59 and a half and I can start making withdrawals, that will be worth something if I find some good investments to make, which I can with my Rocket Dollar checkbook control account. So that's where it kind of comes full circle, where the power of the contributions, mixed with the power of the investment options, really creates a perfect storm to change outcomes, and change your outcomes, or change someone that's just starting in their career's outcome. It's a fantastic product. Today we're going to talk a few things about contributions. We're going to talk about operating the solo 401(k) a little bit. And one of my favorite features, especially starting out, being young and money going up and down, especially as a young entrepreneur, is the ability to borrow from your solo 401(k) and create some liquidity, should you need it. And then we'll kind of bring it full circle on the checkbook control and the different options available to you, and we'll wrap it up.

We'll keep it brief today, and hopefully share some information that you find valuable. Let's talk a little bit about contributions. The solo 401(k) has some contribution limits, but they're very high. You can defer, right off the top, $19,000 of your pretax income. You can defer $19,000 off the top, and through a profit-sharing piece, should you make enough self-employed income to hit up to the limit is $56,000. So that's a significant amount of money that you can put away into a solo 401(k) if you have that sort of self-employed income. So the contribution limits, as compared to an IRA, for the solo 401(k), are powerful, especially for gig economy workers. Whether it's your full-time job or your part-time job, you can manipulate your tax situation through contributions and then let that money work for you.

Should you be like me, and maybe even contribute too much, and find yourself in a situation where you need a little bit of liquidity, one of my favorite features about the solo 401(k) is the ability to borrow, and it really lets you sort of have a built-in credit line with yourself. And so the way it works is with a 401(k), and this is any 401(k), but it's just made simple with the solo 401(k) you can borrow $50,000 or half the value of the plan, whichever is less.

For example, I had a client at my old firm that his wife wanted to buy a car, and they needed a car, but he didn't want to go through the hassle of going and getting a loan and having a car payment, and just typical car buying stuff. So what he did was he wrote himself a check from his solo 401(k), filled out the one-page loan agreement with himself, set himself an interest rate of prime plus one, which is pretty much standard, and went to the dealership and bought himself a car. Paid cash for it. And now at that point, he has five years to pay himself back into the plan. So he's paying his own plan, the money back, and prime plus one. So he's making a little bit of interest in the plan, which is fantastic. And that's just one example of things you can do.

I mean, some people use it to invest in businesses that they don't want to invest in through a retirement account, because they want to create some liquidity may be outside, so they can borrow, say $50,000, invest in a business. And when that business pays you back, hopefully, let's say double, you have now $50,000 that you keep, and you pay your plan back $50,000. So it's just a line of credit with yourself. And you can sort of act as your own bank. And for me, that loan option sort of let me ride out some income gaps, let's call them, while I was starting Rocket Dollar or between jobs. Or for me it was you leave one job and then you go travel for a while, and that just kind of bridges that gap, and then you pay yourself back. So it's a really good way to create some liquidity while not needing to save that much cash in a savings account that you have to pay taxes on it. So it was a great option for me, and it's a great option for a lot of people. For the gig economy worker, whether full-time or part-time, as we mentioned before, the solo 401(k) is the premier financial product that a gig economy worker can have in their back pocket. It's like the sharpest arrow in your quiver.

S2E2: Helping to Expand the Housing Supply - The Groundfloor Story

S2E1: Building the Amazon of Real Estate with Andrew Luong

In this episode of Rocket Your Dollar, Henry talks with Andrew Luong, one of the Co-Founders of real estate investment startup, Doorvest is an...

Rick Sapio, co-founder and general partner of Mutual Capital Partners joins the podcast to discuss his philosophies of business and success.