Rocket Your Dollar Ep. 19: How to Make an Innovative FinTech Product 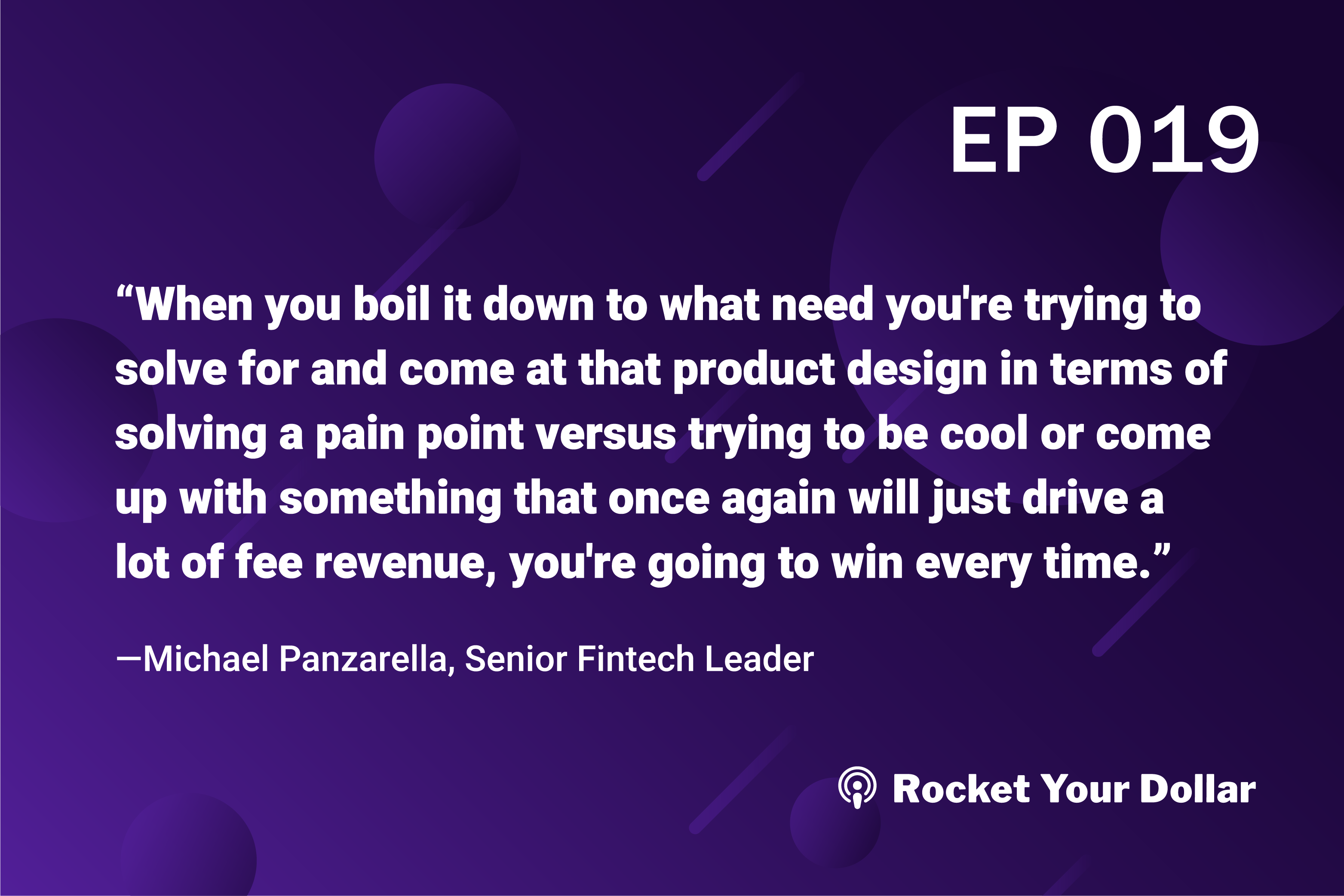 Technological innovation is glorious when it comes to financial products. But only if the tech is solving the right pain point. Michael Panzarella is a Senior Fintech leader and a passionate believer in financial inclusion through modern banking services, and a Rocket Dollar customer. He shares how innovators need to be asking the right questions and answering with a tech product that eases their customers' pain over flash and trend.

Thomas Young: Today we're lucky to have Mike Panzarrella on the podcast, and Mike to me is probably the most experienced person I know in the FinTech space. His career is almost too long to list here, but we'll start. When I met you, you were the chief design officer at Green Dot, before of which you were the chief product officer at Green Dot. You've been at American Express, you're at Square currently, thank you for being here today, Mike. I mean, this is cool for our team to have you, and to spend this much time with you and thanks for carving out a few minutes to be on the podcast with us.

Mike Pazarrella: No, I'm glad to be here, thanks for having me.

Thomas Young: Yeah, of course. And, as I said, I mean, you've touched everywhere in FinTech, but let's start at the beginning. How did you decide to get into FinTech?

Mike Pazarrella: I got into FinTech many years ago and I started very traditionally at a bank branch as a bank teller in college. And as I moved throughout my career, I got into technology and AI and some other things early on and was intrigued by at scale, people trying to mimic really what you get at a small institution, which is a personal service and being able to engage in a community and have empathy towards customers. And I felt that was missing in the industry, and as I've moved through my career, I've worked at really understanding how to provide services and products to human consumers and also engage people and solve a problem, not just create fee income for a bank, for instance.

Thomas Young: And I think that because you've been on the product side and on the design side that, I mean obviously, since that was your route and that's what you wanted, having come from a bank teller position where you're one-on-one, is it fair to say that you just carried that experience into to everything that you did with products? I mean, you've touched products that reach almost every American at this point.

Mike Pazarrella: Yeah, I've been really lucky. I think at last count probably 40 to 50 million people have touched the stuff I've worked on, which is humbling, it's cool. I think that the thing that I have seen in the career is just as technology keeps evolving so quickly. And everyone is just always about tech, tech, tech, tech, and I love tech, I do. I'm a total Apple fanboy, I love it, and I got to work on some Apple products in the past. But I think that what I want to understand in creating products for the FinTech space, and I've worked not only in banking but also insurance and even did a little stint in retail and mortgage and some back-office investing and cash management. I'm lucky to get to do all that. But I think the common thread in all of that is just demystifying financial services.

S2E2: Helping to Expand the Housing Supply - The Groundfloor Story

S2E1: Building the Amazon of Real Estate with Andrew Luong

In this episode of Rocket Your Dollar, Henry talks with Andrew Luong, one of the Co-Founders of real estate investment startup, Doorvest is an...

Rick Sapio, co-founder and general partner of Mutual Capital Partners joins the podcast to discuss his philosophies of business and success.